And into the new.  It has been several weeks since I have had internet access, hence the lack of new posts.  Those weeks have been very exciting and eventful ones, so I will try to catch up on all the happenings of the Crow family.  We left the flooded banks of the Mississippi River and headed across the drought-ridden states of Texas and New Mexico.  As we headed out of El Paso, we had an extra day to get to our destination of Silver City, NM.  On a whim, we stopped at an RV dealership to look at a trailer that had caught our eye.  We have been talking of replacing our fifth wheel for some time, but just hadn't found the right one.  The trailer we first saw was not the one for us, but they did have another used fifth wheel that would work very well for our family.  We asked about trading in our original RV, and upon examining it, they told us that it had a serious structural flaw, and said that a large pothole could cause it to crack in two (worst case scenario)!  This was rather disturbing, so we inquired about repairing the damage.  they told us it would probably cost $6,000-10,000 to adequately repair the problem.  After talking it over, we decided that pouring that much money into an RV that our family had outgrown would be a waste.  We prayed about what to do, and ended up signing papers for a "new" RV.

Of course, this development changed a lot of things for us, since we were scheduled to be at camp for the next two weeks.  We told the dealership that we would be back in two weeks to pick up the RV,and headed to Silver City.  I stayed home the first week and packed up our belongings as best I could while Paul and Josiah went to junior camp.  I could not believe how much STUFF we had stowed away in the cupboards!  I took a lot of boxes and bags to the Goodwill and threw even more stuff away.

The second week, we all went to Gila Christian Ranch.  It was teen camp, so my kids were not involved in the activities, but Paul and I helped with the music and skits and activities.  What an experience it was!  The camp is located in the middle of nowhere - off the grid, as they say.  The only electricity comes from solar power/windmill/generator.  We had a great week, though, and we are looking forward to being there next year as well. If you want a unique church camp experience, I invite you to look into going to Gila Christian Ranch in Silver City, NM.

After camp, we went back to pick up our RV.  It wasn't ready, having had several things that needed to be done to it, but after three days, we could not delay our schedule any longer.  We "moved" box by box into the new RV, and were done in two and a half days.  We are almost completely settled in now, although I still have a box or two to put away.  We drove to Albuquerque, NM, that first night, and found out that the trailer had some problems we didn't know about.  It was rather discouraging at first, but the Lord put us in the path of some very wonderful and gracious people.  Our truck also had a problem with the throttle positioning sensor.  While the truck was being repaired, our friends helped us fix the trailer slide-out and the closet which had collapsed.  The Lord provided for the truck repairs in a miraculous way, and we left Albuquerque in better shape than we arrived, as far as our equipment was concerned.


We are on our way to Minot, ND to hold a VBS next week, if the town hasn't totally washed away by then. :) While driving through NM we saw the smoke from those vast fires, and I could not help but be amazed at the vast destruction of our country - on the east by floods, and on the west by drought and fire.  Thank the Lord for the safety He gives!
Posted by Sarah at 11:12 AM 1 comments 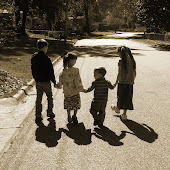